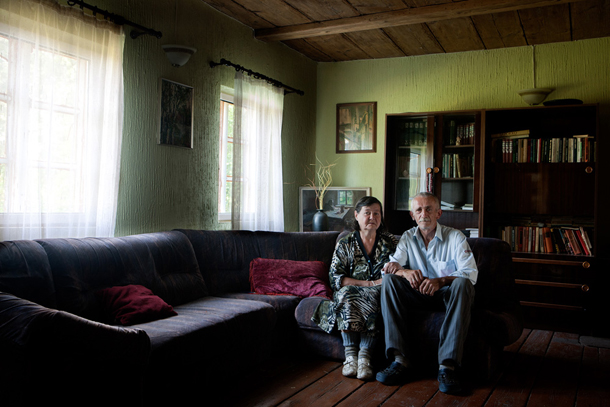 Felikess and Tatjana worked for a gypsy Baron in Riga for thirteen years and lived in a gypsy commune. When the Baron decided to move away they became unemployed and homeless. For one and a half years they moved around before a relative recommended they move to Lenas church commune in Skrunda. They have been there now for about two years. In January 2013 they got married but have been together for thirteen years. In the commune they do housekeeping and also act as caretaker for the church. The rules of the commune are very strict; members of the commune are not allowed to use electronic communication devices, watch television or movies and are allowed to listen to Christian radio only. From time to time residents may be checked for substance abuse. A number of times a year they go on pilgrimage and have only recently returned from Medjugorje. When they arrived at the commune they were separated for four months. This was to prevent them cohabiting which would have been a breach of house rules. The commune house and land belong to the Latvian Catholic Church. The church was built in 1620 approximately and the house is for the priest and the people who work for the church. The commune was established in 2001 and has a steady through flow of residents.